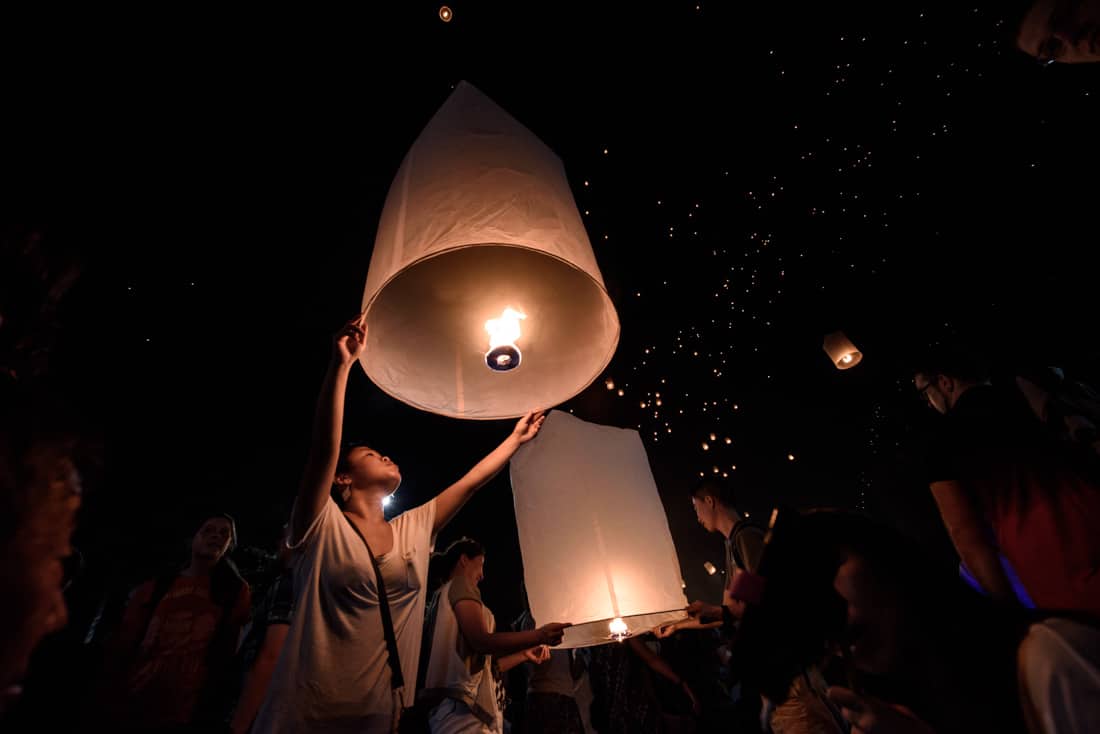 Yi Peng festival is an annual celebration in Chiang Mai and Northern Thailand where thousands of lanterns are lit and sent into the sky. It is originally a religious ceremony, celebrated on the night of the full moon according to the Lanna (Northern Thailand) lunar calendar. You can read more about the history of Yi Peng here.

Before and after the full moon night there are many other events, for example, a parade, crafts fair, fireworks display, extensive market and so on. During this time all temples are colourfully decorated, with monks chanting prayers and lighting lanterns during the night. It is a spectacular display that somewhat reminds of a fairy tale. The lantern scene in Disney’s Tangled has some similarities, albeit the cartoon’s vision is on a much grander scale.

There is a lot of confusing or misleading information on the internet regarding Yi Peng about the actual dates, “tickets for foreigners”, location etc. After visiting the event myself in 2015 I would like to share my experience and try to comment a number of things from the point of view of a Westerner. Overall, it is definitely worth visiting because it is a truly unique event that is not available anywhere else on such a scale (one reason may be stricter fire safety controls in Western Countries).

Yi Peng festival can coincide with another Thai festival, called Loi Krathong that is celebrated all over Thailand. “Krathong” is a decorated floating object, typically comprising flowers, candles, burning incense sticks and sparklers. These can vary in size, price: from a basic model with leaves and one candle to massively complicated “beasts” with a number of levels and expensive flowers. This event is a nice and captivating experience on its own. And unlike the lantern display it runs for a number of days. At night people go to a river or another water body, light the burnables on the krathong and let it drift away with the waves. Hundreds of krathongs join together creating a relaxing and pleasing setting.

It must be noted that some places for releasing krathongs can get quite busy. If many people are getting on a shabby platform, you might want to think carefully if you are prepared to swim if the platform collapses or if you are accidentally pushed in water (though some Thai people actually go in water to release krathongs).

It must be noted that many people try to commercialise on this popular Thai traditional event; additionally, in 2015 the local government imposed restrictions for lantern releases that made things even more confusing. It is important to realise that lanterns are released in many locations and since many people will be concentrated in Chiang Mai city centre, there will be places with reasonably nice (although not spectacular) lantern displays for free, such as bridges, temples etc, a short walk from your hotel!

Between 2011-2014 two separate lantern release events were held outside Chiang Mai city centre (Mae Jo university grounds) that were not part of Yi Peng Festival: a free ceremony on the day of the full moon and one paid ceremony for foreigners a week later. From 2015 there is only a short time windows to release the lanterns set by the local government, therefore, the paid event was shifted to the allocated window and the free event was not held in 2015. The religious ceremony gave way to profit making, although it seems to be the general trend in Thailand. Unfortunately, tickets to the paid event were quickly sold out and attracted massive speculation ($300+) on the internet in the months before the festival.

In 2014 Yi Peng festival was held between the 5th-7th of Nov; the lantern release night outside Chiang Mai was on the 25th of Oct, while full moon was a lot later on the 7th of Nov. This video shows that the synchronised lantern release event at Mae Jo was good.

In 2013 Yi Peng festival was held between the 16th-18th of Nov; the lantern release night was on the 16th of Nov, while full moon was on the 17th of Nov. The ticketed event for foreigners ($100) outside of Chiang Mai on the 23rd of Nov. The free event was great, as can be seen from this video.

You can also find similar spectacular displays from earlier years.

In 2015 Yi Peng festival was held between 24th-26th Nov. The festival consisted of many events that were announced beforehand. A timetable for year 2015 is shown.

Full moon was on the 26th of Nov. In 2015 signs were displayed in many locations that lantern release was strictly restricted to the night on the 25th of Nov, between 9pm-11pm. That is why the free event could be considered as the lantern release in Chiang Mai city centre (Nawarat bridge and other locations) and the paid event was held at Mae Jo at the same time. Overall, there were many more lanterns released in Chiang Mai, unfortunately, people did not wait until 9pm to release their lanterns. Scattered patches of lanterns started to appear here and there from around 8pm (video here). Local police did not like this and forcibly extinguished, broke or confiscated lit lanterns. But soon they could not manage the numbers and by 8.30pm most people started lighting their lanterns. So, there was a continuous stream of lantern between 8.30 – 00.00. Unfortunately, although beautiful, this did not create a spectacular display. It seems the paid, stage-managed event, where the release was synchronised to exactly 9 pm produced a much more impressive spectacle, which gave outstanding photographic opportunities in the first 30 seconds or so, as shown here.

It must be noted that there were many “near miss” incidents during the festival: lanterns too heavy to float drifted towards unsuspecting people, lanterns made of flammable material ignited and had to be put down in a dense crowd, burning lanterns got stuck in the trees or electricity cables. Only buy lanterns from sellers that at least look responsible: in small shops, near temples etc. A number of police vehicles carried batches of confiscated lanterns sold by sellers on the streets, presumably because of safety concerns. Particularly, cute painted lanterns caused most problems as they were too heavy to go up.

In 2016 full moon will appear on the 14th of Nov, and it is reasonable to expect that Yi Peng Festival and the lantern display will occur around this time. Some websites are selling tours of Yi Peng to coincide with the 14th of Nov 2016, which reassures even more that it is the right date. However an official confirmation is the only way to be sure.

If the free event in Chiang Mai was coordinated, it could be as good as the paid event.