Journey to the Glyder Fawr

15 Apr Journey to the Glyder Fawr

Posted at 20:56h in Travel by marcomanzini
0 Likes
Share
Home » Journey to the Glyder Fawr

Climb the summit of the Glyder Fawr is one the most challenging path in the Snowdonia National Park, most of the people prefer to stop at the feet of the mountain where there are two lakes easily reachable trough the miners path, the Llyn Idwal and the Llyn Bochlwyd, definetly a beautiful and peaceful destination after a short walk. The Glyder Fawr (1,001 m) is a mountain and is the second highest peak of the Glyderau (a mountain group that include the Tryfan) and the sixth highest in Wales. The view from the summit is one of the finest you can find in north Wales: The Snowdon rise at the west, the Ogwen Valley in the north gently descend to the sea, the lights of Bangor at the sunset and night are a must see if you decide to camp overnight in the summit. On the way to the Glyder Fawr a series of spectacular rock formations can be seen, the most beautiful is without doubt the Castell y Gwynt, on the top of the Glyder Fach, also known as the Castle of the Wind; during the windy days and night the wind’s sound is amplified by the spiky rocks creating a suggestive atmosphere. 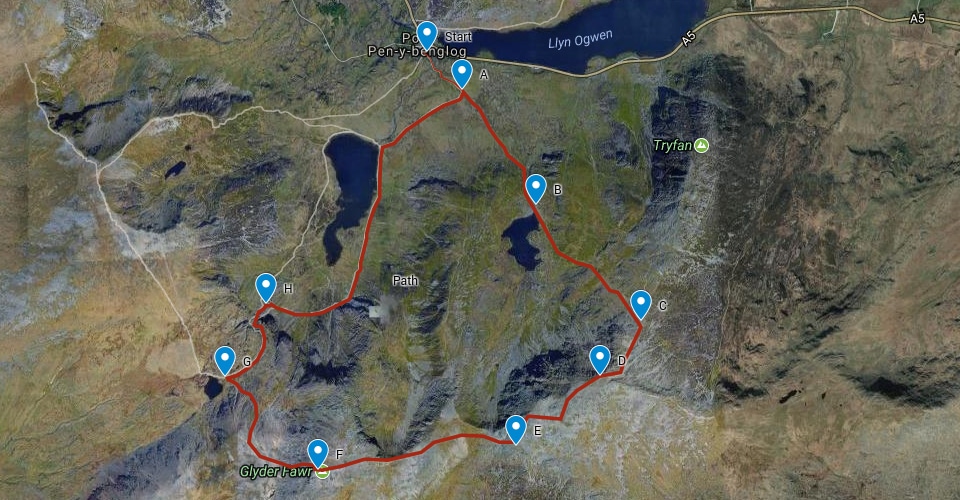 The itinerary leading to the Glyder Fawr start from the Ogwen Cottage, on the west side of the Llyn Ogwen lake about 17 Km from the well know and picturesque town of Betws-y-Coed. The Ogwen Cottage is a perfect start as is the home of a café and a little car park, the car park is often full especially in the week end, however the car can be left on the side of the street as is quite wide, an hostel just next to the cottage can be a good base for an early start.

The path start on the left side of the Ogwen Cottage, leave the big rock formation at your right, fallow the well maintained and busy path, after the little gate and the bridge with a colourful waterfall the path start to gently rise. After about 400 meters from the gate, the path split (A), fallow the left fork on the less used path and leave the miner’s track on your right, the other path will be the return at the end of the journey, after an additional 600 meters keep the waterfall on your left without cross it. The lake Llyn Bochlwyd is soon visible after a sharp rise on the path made of tall steps in occasion quite challenging to climb. As soon the ground level and you see the lake the path disappear turning in a stony ground (B), cross the river where is possible, the path will soon reappear and will climb soon in a shallow valley.

The environment at this point start to change, the grass is less dominant ad leave space to an extremely rocky but still stable ground, The massive rock formation on the left is the mountain Tryfan. About 600 meters after crossing the river, on the distance will appear a man made rock wall (C)distinguish by a little stair, this is where a clear path end and will not return for quite a long time, the top of the ridge will be a rocky and desolate place where is not easy to distinguish the path. After crossing the the wall trough the stair, leave the Tryfan on your back climbing what is look to be a dry stream and a not obvious path, it can be quite challenging, the crumbly ground will force you to use the arms for reach the summit (D).

The summit of the ridge is just after this short but challenging climb, the path will be now without drop for few kilometres, the environment on the ridge up to the Glyder Fawr is a mixture of big slabs of rock and gravel, keep fallow the ridge to the Glyder Fawr (E), an extraordinary spiky rock formation with a beautiful view over the Ogwen Valley on his right, This location is also particularly good if you wish to wild camp, there are few small flat patch of grass scattered on the base of the Glyder Fawr.

Keep the Glyder Fawr to your right and fallow a not very clear path trough the rocks, at the first visible path keep the left, soon where the path seams to disappear again fallow the piles of rocks placed by the hikers, in some part are the only good reference to fallow, they will soon lead to the Glder Fawr(F), the highest point of this circular path. After the Glder Fawr the path start to descend, a very slippery and confused path turning to the right will descend to Llyn y Cwn or mostly known as the Devil’ Kitchen (G), when the path split, turn on the right where the ground gently rise.

Leave the lake behind and after about 400 meters trough a easy path, a wall mark the start of a sharply descend in what will be the last slippery and crumbling section, a mix of stairs and rock will lead to the Llyn Idwal lake. At the first opportunity (H), take the path turning to the right and keep the lake at the left, the path will than continue easily and well marked for a couple of kilometres, the pat will soon meet the first fork encountered in the route (A). The Ogwen Cottage will be soon visible down the valley.